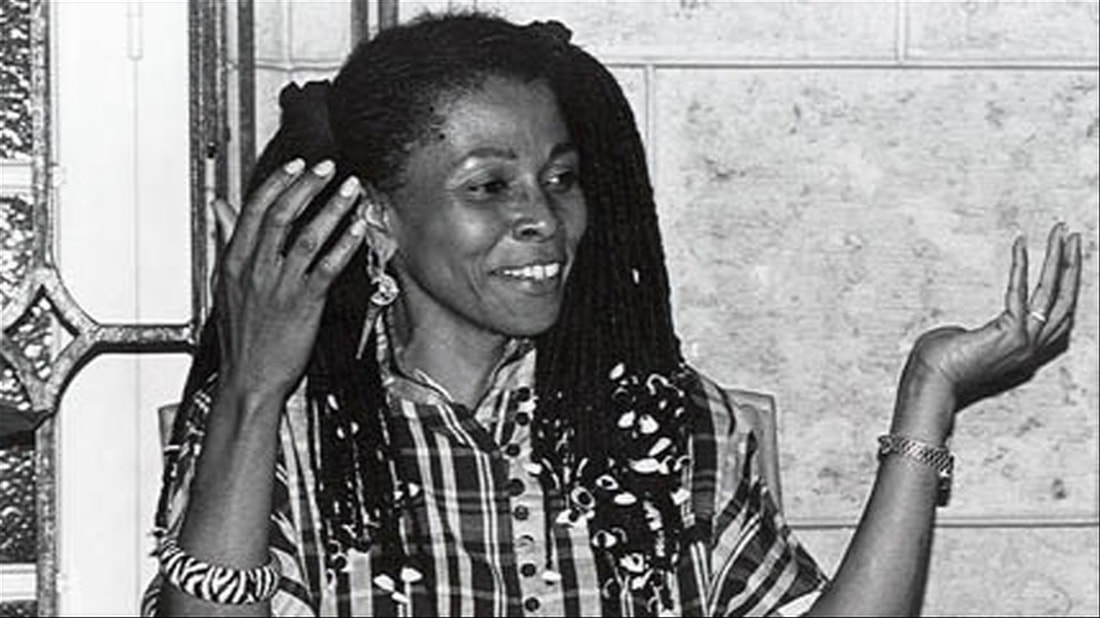 Who is Assata Shakur, and why is she on the FBI list of top terrorists?

After three decades in exile as an author and editor in Cuba, Assata Shakur’s longtime FBI predator stigmatized her as the first woman on its Most Wanted Terrorists list in May 2013. They upped the bounty on her head to $2 million! Shakur never was and is not now a terrorist. But the FBI appears desperate to intensify its police-state activities and discredit political dissidents, especially Black revolutionaries.

The frame-up. Shakur was shot twice and arrested in a traffic stop in 1973 on the New Jersey Turnpike for a “faulty tail light.” It led to a shootout that killed a state trooper along with the car’s driver, a close friend. Sundiata Acoli, the third companion in the car was wounded and captured. He remains in prison today.
The trial was a mockery. Her jury was all white. Even after state trooper James Harper testified that he never saw Shakur with a gun and that she was shot while holding up her arms, she and Acoli, both unarmed, were convicted in 1977 of murdering trooper Werner Foerster — and their comrade Zayd Shakur! Assata served time in a men’s prison where she was subjected to vaginal and anal strip searches and under continuous threat as a “cop killer.” She was able to finally escape with outside help in 1979, and in 1984 fled to Cuba, which gave her political asylum. Radical Women organized a Feminist Brigade to Cuba in 1997 which met with and heard Shakur speak.

The making of a radical. Shakur’s own experiences shaped her becoming a revolutionary feminist. Her book Assata, An Autobiography, published in 1987, reveals that journey with passion and eloquence. She was raised by loving and strict grandparents who repeatedly told her to “Hold that head up!” and “Who’s better than you?” Having been a Black woman worker, she formed an acute sense of racist and sexist bigotry on the job.
Like many others, Shakur first thought the U.S. was fighting for democracy in Vietnam. But Blacks were being assaulted and killed in her own country. Acquaintances looked down on poor Blacks and were more concerned with making money, buying stuff, and aiming for the so-called American Dream. But Shakur always spoke up for the afflicted and took abuse from nobody. Her quest for personal dignity transformed her into a freedom fighter.

Life in “Amerika.” During the 1960s and 1970s tumultuous protest erupted, led first by the Black Civil Rights struggle, morphing into a militant anti-Vietnam war movement, and deepening to include radical movements for the rights of Chicanos/as, Asian Americans, Native Americans, women, lesbians and gays, disabled people, and ethnic studies education.
By 1969, the Black Panther Party had become the number one organization targeted by the FBI’s COINTELPRO (Counter Intelligence Program). Any radicals, but particularly Blacks, who spoke out and organized against racial injustice, poverty and war caught the attention of this infamous counter-insurgency plan, which persecuted, framed and assassinated African American militant leaders. The FBI spied on, slandered, and disrupted many U.S. political organizations, including the American Indian Movement, Southern Christian Leadership Conference, NAACP, and Congress of Racial Equality.
During that same time, Assata was involved with the Black Panther Party in New York and the Black Liberation Army. She visited the Oakland branch of the Panthers, and sought out Asian brothers and sisters struggling against racism. She had concluded that Black nationalism was a dead end; her worldview became internationalist.
Between 1971 and 1973, she was being hunted down and put on trial for seven different crimes. All of them were dismissed or she was acquitted, once with a hung jury. In 1973, in a compelling opening statement when she and co-defendant Ronald Myers stood accused of a bank robbery in 1971 in Queens, N.Y., Shakur spoke out:
“This case is just another example of what has been going on in this country. Throughout amerika’s history, people have been imprisoned because of their political beliefs and charged with criminal acts in order to justify that imprisonment. Those who dared to speak out against the injustices in this country, both Black and white, have paid dearly for their courage, sometimes with their lives.”
Thirty years later, government forces would still rather see Shakur dead because she dares to speak the truth about political repression. As the National Conference of Black Lawyers points out, branding her as a terrorist creates an atmosphere the government could conveniently use to justify an assassination.
Says Guerry Hoddersen, former Student Nonviolent Coordinating Committee worker and International Secretary of the FSP:
“This coming August for the 50th anniversary of the March on Washington, Obama and all the other establishment types will hail Martin Luther King — a dead hero, but say nothing about a living Black woman who fought for justice and socialism, and is now placed on the FBI’s top terrorist list. ‘Amerika’ likes its Black heroes dead. It looks back and hails the foresight and courage of those now passed, while burying the living.”

An unfinished fight. Today, King’s dream for Black America is still far from reality. In June, the Supreme Court struck down the heart of the Voting Rights Act of 1965. It means that racial and ethnic minorities and low-income majorities will face bigger barriers to voting in states with a history of bias. Texas, for example, will put into immediate effect a voter I.D. law that had been blocked by the Voting Rights Act.
Many of the surviving ’60s and ’70s radicals are still fighting, like the towering political prisoners Mumia Abu-Jamal and Sundiata Acoli. Black women are organizing across the country against massive dismantling of public schools and other social services. Black prisoners are leaders in the momentous, multi-racial work and hunger strike of thousands of inmates against solitary confinement and criminal prison abuse that began July 8, 2013.
In a 1998 “Open Letter from Assata,” posted by Colorlines in May 2013, the 65-year-old revolutionary told her story:
“I am a 20th century escaped slave. Because of government persecution, I was left with no other choice than to flee from the political repression, racism and violence that dominate the U.S. government’s policy towards people of color. … Black people, poor people in the U.S. have no real freedom of speech and very little freedom of the press.”
Shakur’s quest to tell the truth and the basic right to foment change reverberates among all of us. By standing up for her, we take a stand against our government’s ominous criminalizing of dissidents and whistleblowers.
As Shakur’s life shows, revolutionaries are not born. They are forged — from historical, economic and social conditions and fighting against oppression. In the United States, founded on 400 years of slavery, Black Americans like Assata are pivotal to building a revolutionary movement in this United States.
Source: ​http://www.socialism.com/drupal-6.8/articles/who-assata-shakur-and-why-she-fbi-list-top-terrorists